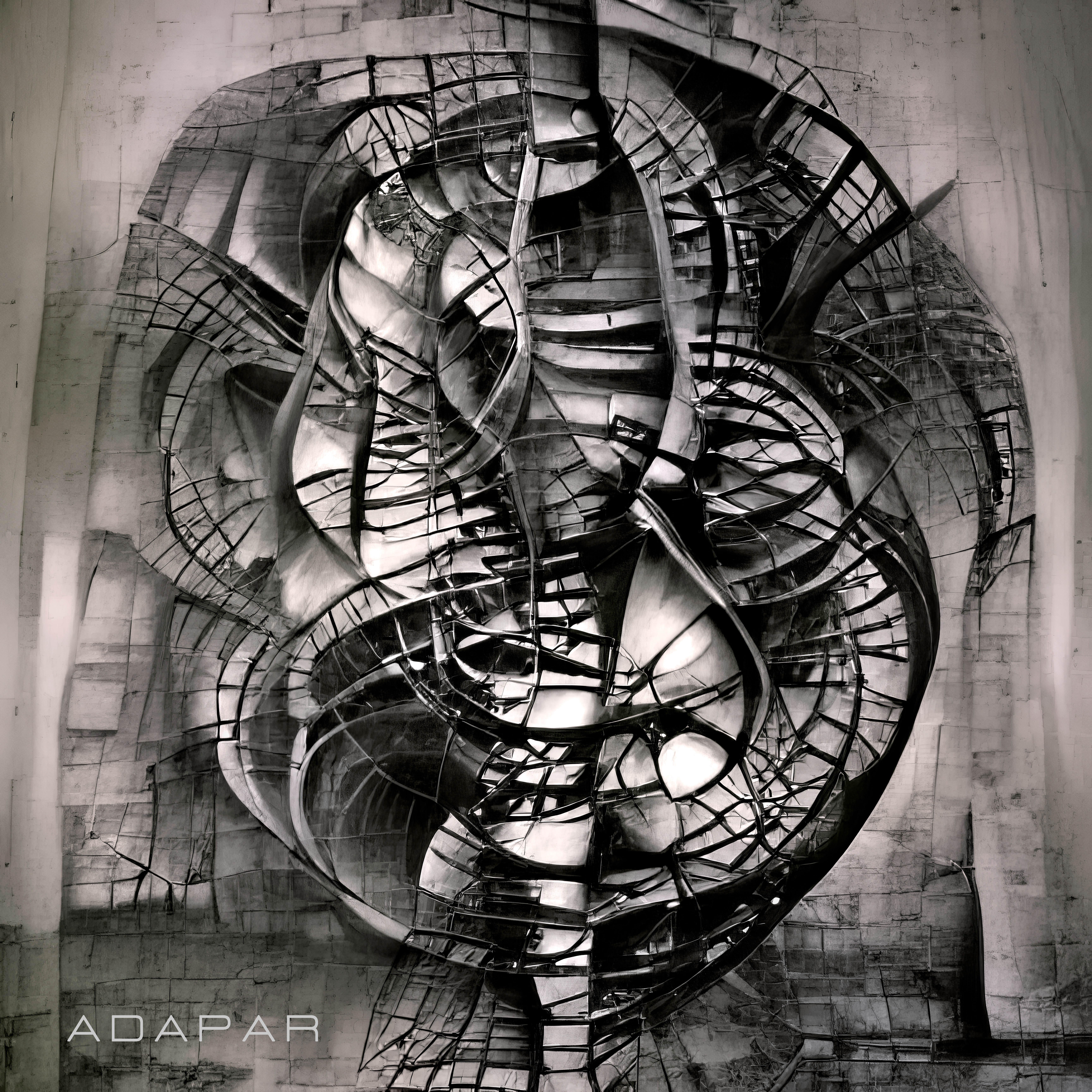 "Álvaro Domene charmed me into writing something about his new album, ADAPAR, a new collaboration with saxophonist Álvaro Pérez. It didn’t take much convincing. Having worked with him in past ad hoc settings and PHONON (with Elliott Sharp and Colin Marston), I enjoyed his fleet, intelligent improvising reflexes and distinctive voice on the guitar, mating sophisticated, non-cheesy metal-inspired technical chops with the kind of angular, modernist logic I relate strongly to. I decided not to quiz him about the process, instrumentation, or any other aspect of the production. I’m using my battle-scarred ears and obsessive experience as a listener to decode the logic here.

Upon first listening, the music immediately struck me as very organized, sharp, and articulate. However, the baseline ADAPAR deals from is a violent, fractal sort of organizational and timbral CHAOS. I cannot help but to think that these concise, virulent soundscapes both mock and reflect the terminal data overload and technological horror of our current landscape. I’m happy to announce that this is defiantly non-idiomatic music. Somebody grasping desperately for straws might try to toss this into the “electronica” bin, but this frenzied skree sure ain’t nothing to chill out to, hippies. (If you’re going to try and dance to it, I proclaim you to be a very warped, possibly psychotic weirdo.)

Opening with a brief, disorienting duet of fractured fax-machine glitch-babble, a hyperspeed torrent of percussive impulses stampedes forth, as does the first salvo of frantic saxophone mangling by his cohort Álvaro Pérez. The maniacal drum machine programming here doesn’t settle into any identifiable meter or beat whatsoever – its function is to provide an aggressive hailstorm of dense, asymmetrical impulses: Jungle beats disemboweled vis à vis a noxious, braincell-destroying heroic-dose bongload of pure satanic DMT. Clear, hard shifts in activity assume the roles of melodies and choruses in this chthonic classic rock nightmare. It’s not a dull roar, but a deliberately layered approach to cacophony. Towards the very end, something actually resembling a discernible guitar sound emerges. For one second. Next!

The second track, "Unhindered Autonomy", begins with another cryptic sonic deconstruction: a malfunctioning robot, out of sync with its assembly line job. Oh no! An ominously chugging motif positions itself in front of the clatter. The saxophone evokes a pesky, insistent mosquito buzzing around the ears. The drum machine ratchets up, further agitating the reedists’ spewage. Domene emerges with his first bonafide “guitar solo”, evoking the cyberpunk gnarliness of elder noisicians like Elliott Sharp and Henry Kaiser – two iconoclasts unafraid to disfigure their virtuosity through the latest bank of warped technological gadgets. Elements fade in and out, lurching back and forth at surprising intervals.

By "Stones and Fire", the third track, it is evident that there is a specific language being constructed and explored here. This album deals with a finite and carefully chosen palette of approaches and tones and maintains coherence through structure and variation. In some way, the net effect is akin to the monolithic blare of Death Metal: those who don’t get it think it “all sounds the same”. They just can’t hear it. They don’t have big or hard enough ears for it. Their loss. We do. Also, normies like that usually quip, “The music is okay, but those vocals are annoying!” Right. THAT’S THE POINT. Go away then! Extreme metal’s histrionic/inhuman subterranean utterances are deployed exactly to send dilettantes hightailing it out of the pit as quickly as possible. As such, not everybody is cut out for the kind of harsh atonality ADAPAR specializes in. For the seasoned aural gourmand, herein lies a smorgasbord of pungent, rare caviar to be savored. ADAPAR is a coded transmission from another dimension."

Recorded, mixed, and mastered by Domene at Singularity Studio in Kingston, New York