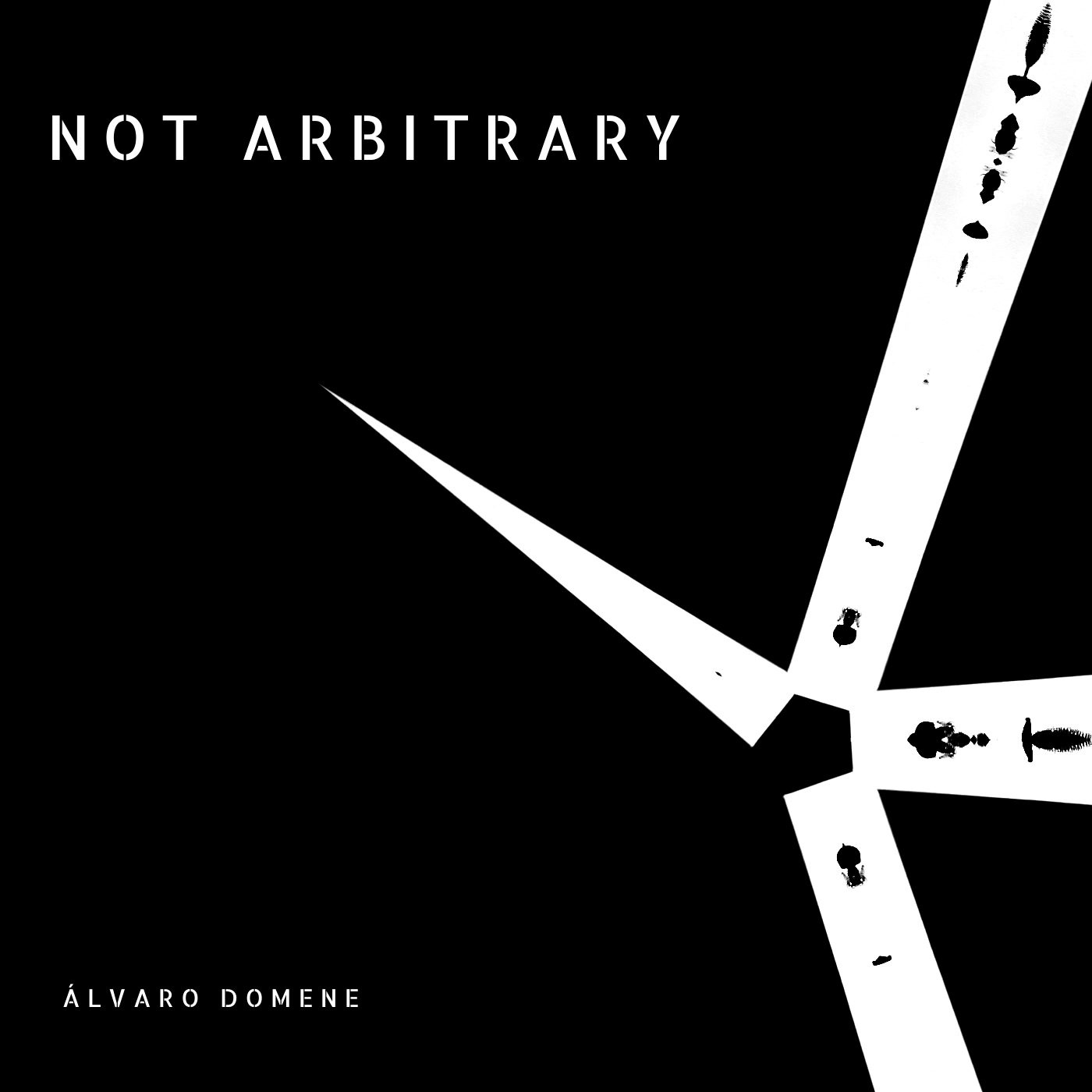 Music for the relentlessly curious ear, spirit, and mind.

Domene continues his virtuosic exploration of the guitar as a tool to conjure soundscapes, induce pure thought via music, and invoke sonic mayhem. This is music that might emerge from an AI’s remote viewing experience and transcription of the magneto-hydrodynamics of a star in birth, giving variations and permutations of that universal process.

Not Arbitrary is a collection of composition/improvisations that ride a wave much vaster than the guitar or human. The features of this ocean are defined by immaculate, articulate phrasing in all timbres, distortions- listen to the track Reciprocal Action: an almost acoustic presence on stage quickly becomes an unfolding, exfoliating set of layered phrases and motives. Spatial deploys and brief delays volley across the stereo field: sometimes a guitar, then a bell like voice, moving forward in time but receiving partial transmissions backwards- culminating in a woody ‘string quartet’ negotiating with insistent robotic refrains. A clean glitched guitar is sometimes recognizable as such, or sometimes a machine-stutter which devolves into a Lyre-birdlike space aided by fluid multi-octave leaps.

Notwithstanding the timbral complexity and the breakneck pace of the soundscapes, this is a truly intimate recording. We are very close to Domene, right next to the guitar, the amp/transducers... whether ultra distorted, pelagic grinding, or super clean glitched octave flights of fancy, we feel to be at the point of sonic generation. This holds as well regardless of the breadth and depth of the spatial and stereo field: what’s happening is in closeup, right >here<.

An ineffable presence in the soundscape appears as absence: where is the superhuman speed metal drummer in support and dialog with Domene? And yet, the music utterly internalizes a drummer’s identity and sensibility. From a certain point of view, this work is a ferocious channeling of percussion and cascading metrics; Domene has become, in a veritably Cronenberg-like way, a drummer/guitarist speaking through the guitar: it’s a master exploration in percussion improvisation, filtered and translated thru the interface of a guitar as alchemical device.

Thus, it’s a recording which also places the listener in an interesting position as playing techniques are sometimes revealed with transparent clarity, and sometimes morph and transmute in the cloud of timbre wrangling, pitch shifting, glitching. Listening becomes a balance between hearing the overall flow, and then looping back in fractions of a second to consider where the ‘guitar’ was revealed, or where it was partially or totally transmogrified. An alien agency frequently intervenes and takes control of the sound. For both the performer and the listener there is a paradox, a puzzle deployed, which demands a temporalized ‘mind’ and attention.

Letting go of any tension to ‘find the instrument’, the music becomes a kind of pure formalism verging on aletheia; one might be reminded of a passage in Thomas Pynchon’s novella, The Crying of Lot 49:

‘She looked down a slope, needing to squint for the sunlight, onto a vast sprawl of houses which had grown up all together, like a well-tended crop, from the dull brown earth; and she thought of the time she’d opened a transistor radio to replace a battery and seen her first printed circuit. The ordered swirl of houses and streets, from this high angle, sprang at her now with the same unexpected, astonishing clarity as the circuit card had. Though she knew even less about radios than about Southern Californians, there were to both outward patterns a hieroglyphic sense of concealed meaning, of an intent to communicate. There’d seemed no limit to what the printed circuit could have told her (if she had tried to find out); so in her first minute of San Narciso, a revelation also trembled just past the threshold of her understanding. Smog hung all round the horizon, the sun on the bright beige countryside was painful; she and the Chevy seemed parked at the centre of an odd, religious instant. As if, on some other frequency, or out of the eye of some whirlwind rotating too slow for her heated skin even to feel the centrifugal coolness of, words were being spoken.’

Pynchon’s novella is a multilayered comedy superimposed on a series of riffs on the universal laws of entropy; an intimate examination of the possible isomorphisms across all systems. In Domene’s Not Arbitrary, similarly, there is an underlying pulse that drives all the performances, operating like the background energy of the universe which the music dials into: oscillations from crystal to plasma and back driven by the energy and information in that pulse.

As the title of one piece tells us, there is a Need for Transformation. The possibility that nearly pure formalism can simultaneously be objective, while also engaging in a subtle and complex dance with forms of mind and affect [achieved through a kind of sonic morphological freedom] is at the core of Domene’s work. Álvaro has commented that this album might be understood to be a kind of ‘AI Derek Bailey meets death metal machine guitar’, and in that sense it is very much a series of permutations, folies, experiments seeking a self aware, agential sonic mind.

There is an absolute commitment to the thresholds of sound, performance, and perception itself- and an intuition that some free ‘form of life’ is invoked when curiosity and invention run fabulously wild like this. Domene moves very fast, above deep tectonic arcs he has set in motion, and very joyously. There are other entities moving in the depths and the heights with him.

Who, if I cried out, would hear me among the angels' hierarchies?
and even if one of them pressed me suddenly against his heart:
I would be consumed in that overwhelming existence.
For beauty is nothing but the beginning of terror, which we are still just able to endure, and we are so awed because it serenely disdains to annihilate us.

Every angel is terrifying.