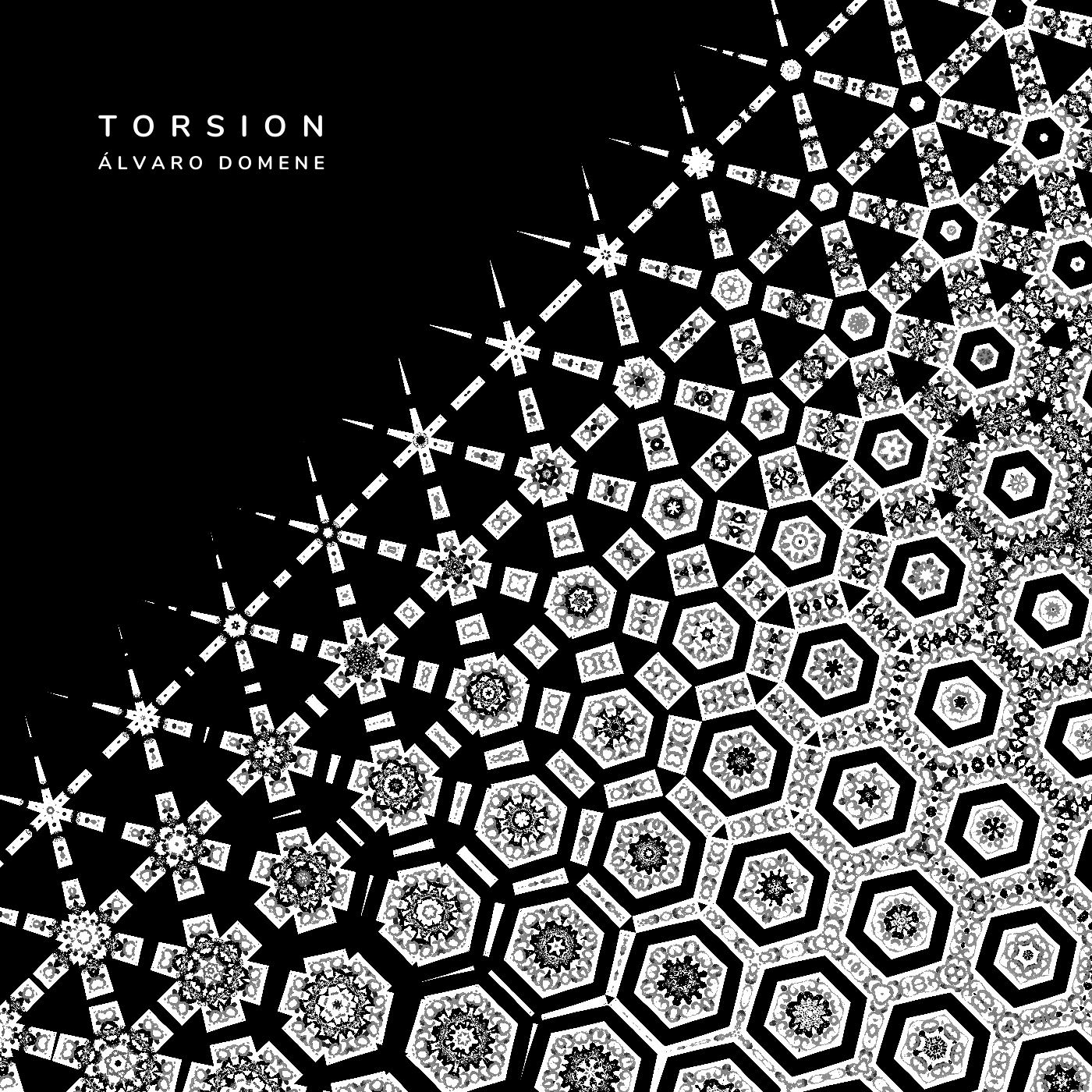 From superimpositions of dense polyrhythms, interlocked scale shifts, to sonics as strata and atmospheric layerings: there is an orientation to overall structures and a simultaneous intense focus on local texture and timbre, a curiosity for micro kernels of motifs and phrases which then give way, scale shifting and voiced by the guitar, to joyous, raging, leaping legatos across a complex percussive soundscape, and then again to vaster, orchestrally textured landscapes.

Conceptually, what drives this project? Is it concerned, as one title suggests, with the erosion of sound? Or the erosion of the tools of sound, leading to a collapse and fusion between systems? The pillars of ostinato and recognizable, partly stable rhythms undergird a cloud of unknowing, a reverse labyrinth in registers above. The guitarist’s mind splits and flies mercurial across the other passages of this labyrinth. Textures grained in foreground and farther away, immersive, all clamor for attention: overlapping syntagmas of rhythm and timbre. Pure pleasure of sound and musical formalisms. And cognition in flux.
\

Domene explores syntax using what he calls ‘certain gestures’ which might lead to an ‘evolution of cognition’- on the part of the player as well as the listener. There is a tension built in as well between the guitarist as programmer, as engineer of rhythm and metric: and the guitarist as pure improviser. Domene says that he is interested in parameter related agency, in testing the boundaries to generate spontaneous material, and in the elasticity of improvisatory languages. These concerns all point to a larger meta-compositional strategy which aims at a renovation of attentional focus- on our part as listeners, and also on the musicians’ part as they negotiate the complex and only partly predictable rhythm underpinnings of the music. If as Domene says, “this music is in part about the metaphor of a consensus based decision making process between the drum synthesizer and I to generate musical ideas”, then the consensus is akin to ‘human in the loop’ processes we see increasingly with AI and machine-learning enhanced art and science.

Thus another one of the end goals of this form of music making would be to negotiate not only the ‘human to human’ aspects of musicking, but also the human to machine interfaces. If cognition is rebooted by the process, it is not only ours as listeners. Implicitly, a machine cognition is formed and inflected.

It’s a wind-up, the torqued intensity of the guitar tone arcing and layering: and hovering high above the tectonics of the system we can perceive a cellular automata of sound, outlined by the crystal matrices of the percussion. Attention shifts across the interlocked grooves and islands, new definitive phrases establish a psycho-acoustics of morphemes resequenced- the breakdown of grooves giving way to a different thought process- a euphoric celebration & unification of mind which then diffuses back out into open space, delicate percussions… and the void from whence it came.

In one’s memory, the bass ostinatos and substructures of music continue, as we walk across a burning desert, small pieces of metal chiming in our garments… the wind evoking voices and distortions in the Eleusinian spaces the music provokes. Rich textures of mind proceed from these meshworks.

Why strive for this in sound? Presumably, again: to lead to a different mode of agency, and of mind. Domene makes music contributing to an extension of the sonic lexicon, and sees the chance for what he calls ‘expanded options through morphological freedom.’ Morphological freedom refers to the possibility that mind and self might be mobile, fluid- that the form we currently adopt is not the only and limiting form. There is a radical kind of equality we might envision through the ethics of a world building project driven by curiosity and love- love for sound, for formal structure, and for awareness.
\

The gambit here is that these emergent sonic morphologies will lead to that ethology. This is, as Bateson put it, a step to an ‘ecology of mind’. If some form of transhumanism could emerge from Domene’s project, it might be one that wants, needs, demands and loves sound- and includes sonics as part of a deeply embedded mode of thinking and being.

Can we imagine ‘being’ without sound? Perhaps we can, but absence of sound for us is a ‘void of being’- and in contrast: in the mind that evolves from Domene’s project, the World is Sound.

Devoid of Sham
Overlapping syntagmas of rhythm and timbre. The first guitar lines function at least as much as atmospheric sheets of texture as they do tonally and melodically. Spatial depths in the soundscape are articulated further by the extreme closeups of select percussion instruments, contrasting the deeper spaces the distorted guitar navigates… or the duplicated, triplicated, clean layered delay line repeated percussion/guitar which forms a cloud of woody chimes around us in the second section. As we pass the halfway point, clean guitar joins again the shimmering clusters accumulating around us. But a closing crescendo heralded by deeper ostinato rumbling in the wide stereo field then recapitulates the energy of the first guitar lines and foregrounds a solo in resonance with arcing textures behind.

Erosion
Guitar electronica across the spatial field- a sci-fi soundtrack- frames percussion as an all too close texture of bubbling, boiling, frictive roughness; and dissipates into clean guitar ostinatos that allow groove to simplify, build. Erosion of sound? Or erosion of the tools of sound, leading to a collapse? The pillars of ostinato upholding a cloud of unknowing, a straight line, a reverse labyrinth. How do the pieces fit? If clues can be left by a bass drum anchoring our attention… our cognition splits and flies mercurial across the other passages of this labyrinth. Textures grained in foreground and farther away, immersive, all clamor for attention. Cognition fractures. A superposition of gears enmeshed with vortices. Metallic tones… space harpsichords, blue jets, whistles reorient the vagrant high hat and snare. There’s always something furtive, in the background, gnawing away at the gears… Vortices are carved back by a fluid octave leaping ring modulated solo, and that fluid is crystallized and chipped away by the gears of rhythm. A foreboding doom metallic pedal chord rings in the conclusion. Far away now the fluid solo decays into upper range timbres and a final closing phrase.


Torsion
There’s a deceiving comfort in the slow build, which is destabilized by a driving kick drum. A space emerges, drawn in pointillisms and boulderlike punctuation of bassline and metallic pedal phrases; then graven with arcings of guitar demarcating other widths of spatiality. An interregnum takes over with layerings of breathy, powdered air expulsion and overdriven and octave swept guitar. It’s a torsion wind-up, the torqued intensity of the guitar tone arcing and layering. Hovering high above the tectonics of the system we can perceive a cellular automata of sound, punctuated by the crystal matrices of the percussion, which moves back to the minimal foreground to conclude.


Flux
The bowing layers and a spattering, tapping, heat schleering space. The slow development and the low ostinato which underpins a wide, echoing space of tubes, of clean metallics… insistent scratches offset the horns which in various tracks, build out an absolutely MATERIAL like evolution, an unfolding. In one’s mind the bass ostinato continues, as one walks across a burning desert, small pieces of metal chiming in one’s garments… the wind evoking voices and distortions in the Eleusinian spaces it provokes. The ostinato sits close to us as it is, indeed, a hallucination we maintain so that we can step, and step again, across the desert landscape. Rich textures of mind proceed from these meshworks.


Morphological Freedom
Where do we stand in the call and response across the mix, through the opening wooden percussion and spatial reverberations? And then how do we feel: through the guitar in synth-like ostinatos which give a stasis to the space opening around us… Attention shifts across the interlocked grooves and islands, new definitive phrases establish themselves. A psycho-acoustics of morphemes resequenced- the breakdown of grooves giving way to a different cognition- and the epic, almost triumphant mixing of horn and underpinning metallic pedal chords, again- a theme in several of the tracks on this album- which feel much like a celebration of a kind of unification of mind which then is allowed to diffuse back out into open space and delicate percussions… the void from whence it came.

Why a morphological freedom? In sound? Presumably, to lead to a different mode of agency, of mind.