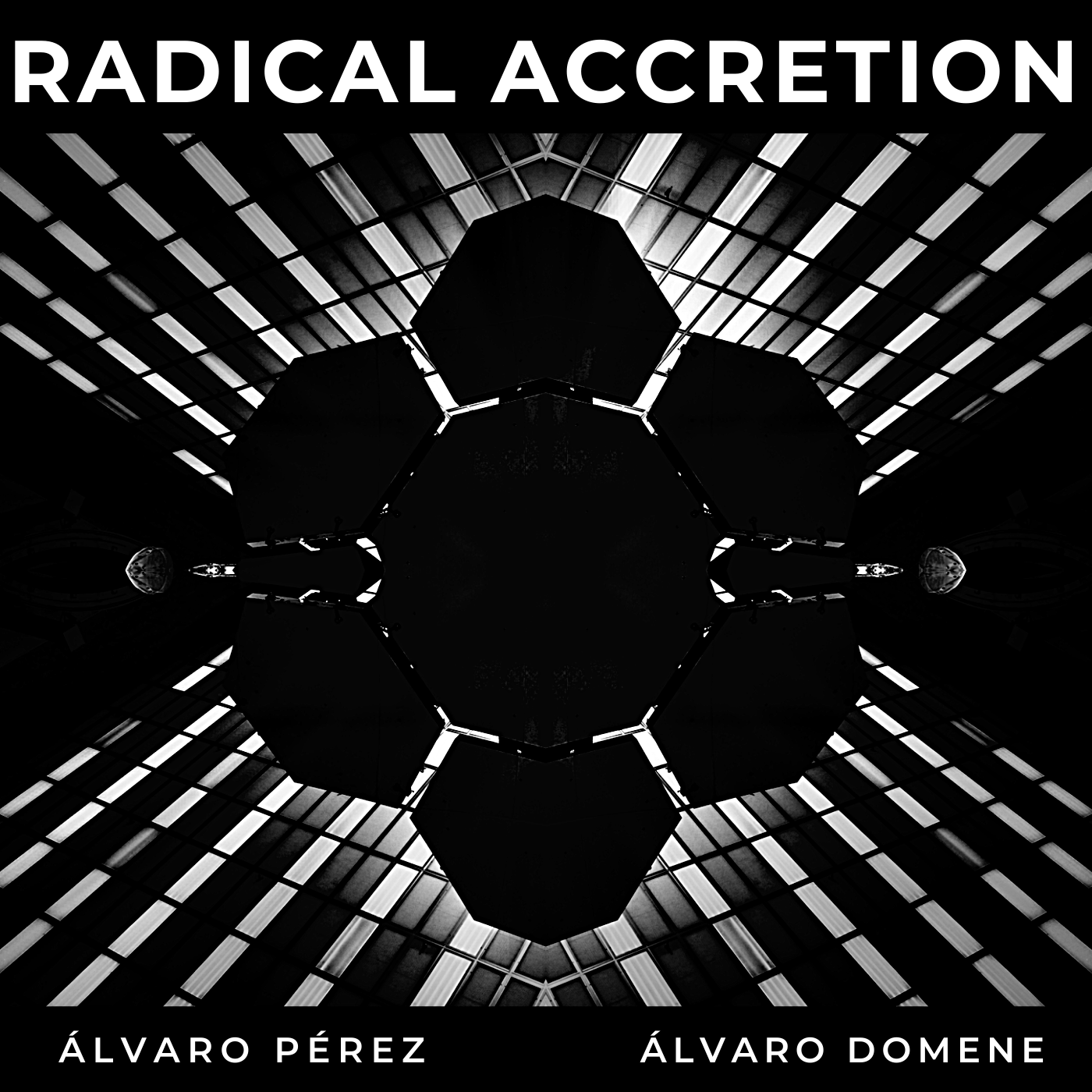 "Radical Accretion takes the listener on an epic aural journey through the bewildering plight of humankind in the year 2021 where satisfying sonic surprises lie in wait around every cacophonous corner.

Faced at first with Domene’s distant and disjointed drilling, Planetesimal Serendipity opens with a quiet buzzing reminiscent of a staticky radio station blaring incoherently in the shadowy corners of one’s consciousness. Pérez cuts through the noise with a sorrowful melodic invocation suggestive of humanity’s intergenerational anguish as we begin to awaken from our collective dream. The serendipitous occasion that fashioned Earth from a whirling accretion disk culminating in the evolution of a being capable of transcending the very patterns it created for its survival by asking, “Is this all there is?”

The eternal question that tugs upon each unexplored human psyche floats out of awareness as A Feather in the Void begins its hypnotic descent into a siren song lullaby lulling the listener into a false sense of security. Certainly we are safe here to rest and forget the darker forces that threatened, just a track before, to break through the thin veneer of certainty that enshrines our ticky-tacky epistemologies. Domene tip toes trepidatiously into the piece like a curious but awkward alien drawn out the shadows by Pérez’s reassuring melodies, so beautiful and inviting the listener finds herself there, frozen in awe and anaesthetised, as two once lost souls entangle, an ephemeral dance in the void.

Alas, just as we begin to pirouette into oblivion, the alarm sounds.  It is time for *Radical Accretion.* Domene and Pérez’s whirling evocations repeat and build before Domene stirs us from our trance-like state with a terrifying wake-up call in the form of a dark and crunchy melody so sinister it sounds as if the Devil himself showed up to throw open the gates of hell, so all of humanity may see what was hitherto kept hidden from sight. Right then, Pérez blasts an epic rally cry into the roiling depths of Domene’s super-heated distortion, calling all to awaken, unite, and shine our collective light into the darkest recesses of the machinery of totalitarian rule that enslaves us.

The cold loneliness felt by those who, amid the unawakened masses, see reality for what it is, chills the listener to the bone as Liquid Light Axis spins us around and illuminates. We have much more to do now that ignorance can no longer serve as an excuse. We must face our inner demons and allow the light to penetrate deep into our most secret hiding places.

And, in *Iron Raindrops,* the duo marches us there to confront the fear that lurks beneath it all.  Here, we go within for a cleansing like none other, a psychedelic caldron where we may boil away our deepest shame. Pérez issues a heart-wrenching cry into the metallic liquid abyss while Domene alchemizes metaphorical metal objects that hover before us tantalizingly before disintegrating out of our awareness.

Pérez breathes harmonics into Exomoon Invisible with a lovely yet haunting melody so crystal clear you can hear his lips upon the reed and fingers upon the keys. Tinkling refrains from Domene’s guitar seem to boomerang back and forth, frothing a swamp of metallic critters that come to the surface to vie for dominance before Pérez dissipates the building tensions with his graceful notes that, then, give way to Domene’s final nullifying crescendo and decrescendo. The invisible made visible and then invisible one more.

Upon entering *Electron Capture Supernova,* the duo challenge us to be at once in awe and unafraid when faced with the sheer power of a star so dense it cannibalizes the very things that keep its core from collapsing. Are we auricular astronomers observing a star at once too dense to escape core collapse and not heavy enough to prolong its life?  Or, are we the star itself, all braggadocio and bluster, before caving in on itself only to explode out and shed the egoic layers cultivated to protect our vulnerable authenticity.

Darkness and light so perfectly expressed; their existential interdependence is felt with every intertwining note and impulse, demanding that the listener feel the fractal unfolding of this eternal now. Tapping into the universal consciousness, this duo has elaborated a primal scream that drills straight into the amygdala while, at the same time, opening the third eye.

Irreverent and unrestrained in the application of their virtuosic mastery over their respective instruments, Domene and Pérez catapult the evolutionary progression of musical form lightyears into the future, a metaphysical feat in which the most progressive and musically literate among us are sure find fresh hope for humanity.

Nothing like anything that has come before it, this album demands not just to be heard but experienced." - Andrea Best