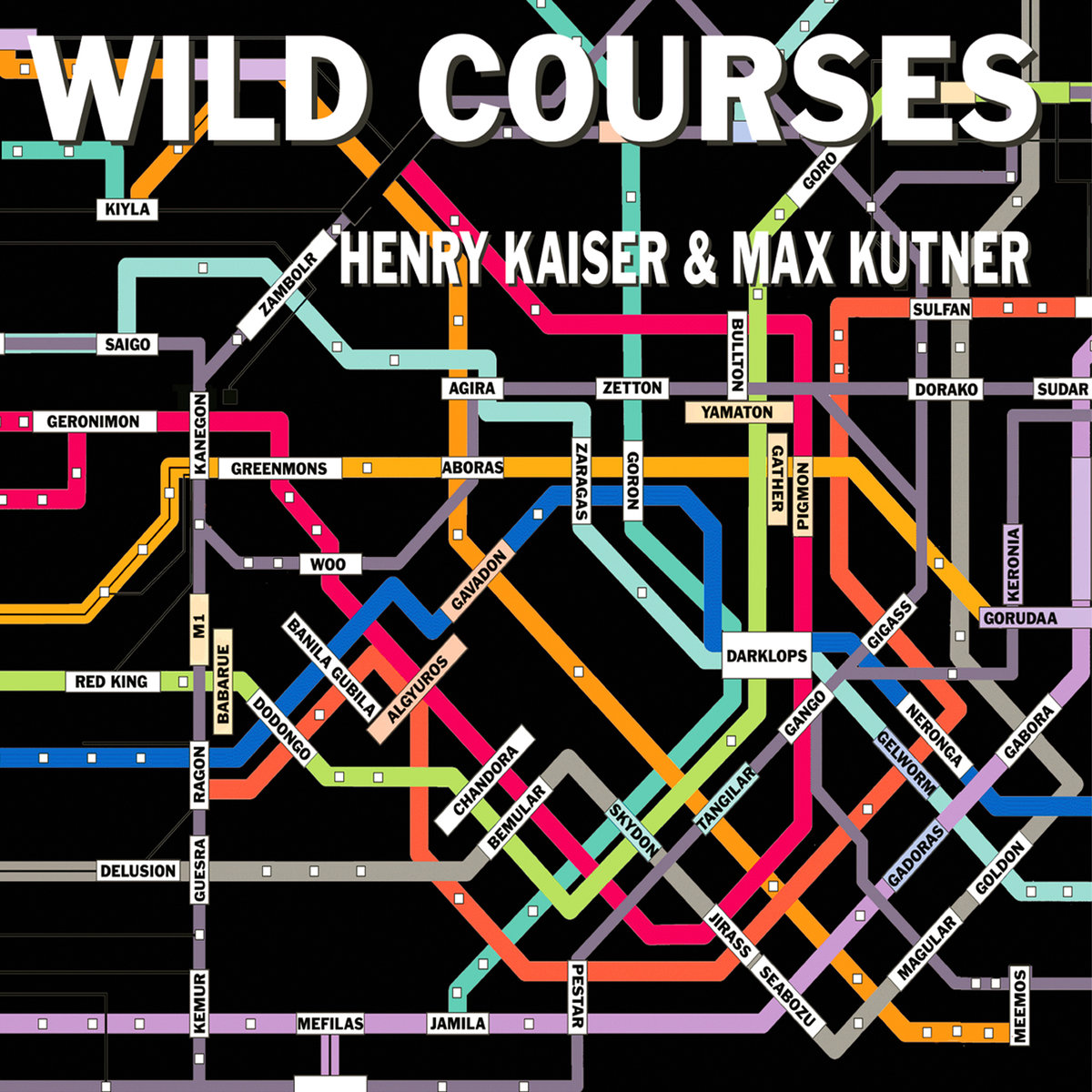 Recorded in April of 2017, this guitar duet album is a particularly special and unusual one. Like Kaiser’s 1979 classic WITH FRIENDS LIKE THESE duet album with Fred Frith, this Kaiser-Kutner recording breaks new ground in an unceasingly entertaining manner. Composed of duets on instruments with coursed pairs of strings, acoustic and electric 12-strings and 8-string bass, the music occupies very unique sonic territories.

John “Drumbo” French originally suggested that the two might find a fruitful recording collaboration together. Kutner plays guitar in Drumbo’s current MAGIC BAND, and Drumbo and Kaiser have collaborated for 40 years. A tip of the hat to the music of the original BEEFHEART MAGIC BAND occurs in the duo’s surprising cover of GLIDER from THE SPOTLIGHT KID. The bulk of the duets are improvisation, recorded live in real time. Restricting themselves to 12-string guitars (not something that neither guitarist normally specializes in) led to many unforeseen discoveries and sonic explorations. Although the guitars and basses chosen for this project exclusively feature coursed pairs of strings, the performers do not wish to be regarded as an exclusively course pair.

As a professional scientific diver, he was an instructor in scientific diving at the University of California at Berkeley for 14 years, until the end of that program. Since 2001 he has been a research diver in the United States Antarctic Program, with 13 NSF-supported deployments to the Southern Continent doing field research for a variety of grantees in microbiology, geology, engineering, oceanography, ichthyology, etc. In addition to the polar diving work he manages both field camps and general research for grantees. He also specializes in creating science outreach and educational programs for Antarctic Science.

He also works in film production as a cameraman, director, producer, and soundtrack composer. He has collaborated on 4 films with Werner Herzong and was nominated for an academy award for ENCOUNTERS AT THE END OF THE WORLD.

Max Kutner is a guitarist, composer and instructor originally from Las Vegas, NV. As an instrumentalist, Max's focus is on new works for the electric guitar as well the promotion of electric guitar in new performance settings. As a composer, Max translates several of his non-musical passions: namely literature and architecture, into a distinctly singular musical language that is neither strictly exclusive or accessible to performers.

Max was responsible for developing, producing and performing multiple instruments in the U.S. premiere performance of Mike Keneally's The Universe Will Provide (REDCAT). Presently, Max is the lead guitarist of the Magic Band (John French) which performs the music of Captain Beefheart around the world. He has also performed in the Johnny Vatos Boingo Dance Party featuring former members of Oingo Boingo, the Grandmothers of Invention (Frank Zappa alumni Don Preston, Bunk Gardner, Napoleon Murphy Brock) and also in the bands of Alphonso Johnson, Henry Kaiser, Daniel Rosenboom and Lili Haydn. Additionally, he leads or co-leads the groups Evil Genius (experimental jazz trio), The Royal US (folk-tronica) and Izela (quintet inspired by music from the Balkans).

His debut solo work, "Disaffection Finds Its Pure Form", is a quasi-ambient process piece that features Kutner on 30 electric guitars simultaneously. It was jointly released in September 2017 through Silber Records and Records ad Nauseam. He followed that release with a collection of home recorded solo songs and improvisations entitled "Array" in January 2018.